There is a two-tiered dispute resolution regime for registered retirement villages:

Every operator must have a written complaint policy that complies with the Code of Practice. The policy must be  available in common areas for residents or intending residents to access or view at any time, and be available on the retirement village's intranet or website.

An operator must offer to give a copy of the complaint policy to a resident who advises it wishes to make a formal complaint, and to an intending resident or resident at any other time upon request.

You can view or download and print a copy of the diagram contained in the Code of Practice as varied 2017. The diagram explains the step by step procedure for raising informal issues, or filing formal complaints and other options to consider using, including the dispute panel. 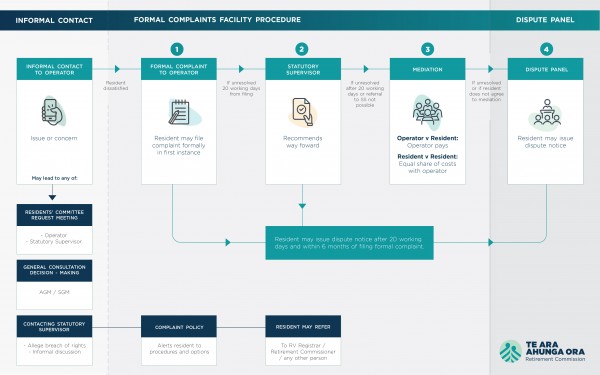 A resident may raise an issue or concern informally with an operator. Most issues are raised and resolved informally and amicably.

If an issue or concern raised informally remains unresolved, a resident can raise it formally in writing as a complaint. Nothing prevents a resident from making a formal written complaint in the first instance.

Nothing prevents a resident using other options or a mix of options, such as engaging any resident committee to call a meeting, referring a matter to the Retirement Villages Registrar or Retirement Commissioner  or other person. The diagram helps a resident understand the range of options it has.

An operator must respond to any complaint and try to resolve it within 20 working days. If it is not resolved, it can be referred to the statutory supervisor and then a mediator. If the complaint still remains unresolved a resident may file a dispute notice to have the matter heard before a dispute panel.