Will NZ Super be enough to support a nation of people paying off mortgages and rent?

Te Ara Ahunga Ora Retirement Commission recently commissioned The Treasury to use the HES to analyse New Zealand’s housing costs across age groups as part of work delving into the adequacy of NZ Super for the growing numbers of people still paying off mortgages or paying rent past the ages of 65.

The findings will help inform the recommendations included in the final report of the 2022 Review of Retirement Income Policies Te Ara Ahunga Ora has been asked by Government to undertake.

The analysis shows those superannuitants still paying rent are much more likely to be spending 40% or more of their NZ Super income on housing, and long-term trends suggest more older householders are likely to be renters in the future.

“It is important to note that this analysis of housing costs is relative to the income received from NZ Super only and does not factor in other income. However, NZ Super is currently the only income for 40% of those 65 and over, and 20% only have a little more.”

A snapshot of how housing has changed over the last three decades or so, shows:

“What all of these insights highlight is the impacts of not owning your home outright or paying rent when you are very reliant, or completely reliant on NZ Super to cover those costs,” says Dr Suzy Morrissey.

“It’s a real challenge for people to make ends meet if they are having to use substantial amounts of their NZ Super to cover housing costs.

“When NZ Super was introduced, it was with the underlying assumption that those accessing it would be mortgage-free homeowners.

“Today, the reality is very different. There are declining home ownership rates, more people needing to continue working longer because they still have mortgages to pay, are paying rent, or haven’t been able to save enough to retire.”

HOUSING GRAPHIC: Housing stages through the ages – 1980s, 2018 and in the future 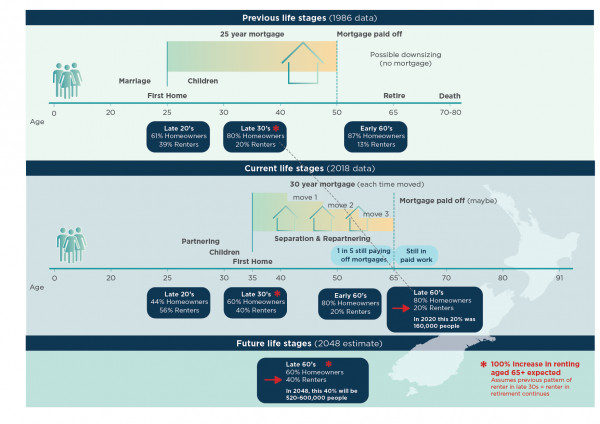 More information, including the terms of reference, is available here.

Any eligible New Zealander receives NZ Super, regardless of:

For more information, or to arrange any interviews contact:

Posted in Review of Retirement Income Policies; Posted 5 months ago