Report on the 2019 Review of Retirement Income Policies

Report on the 2019 Review of Retirement Income Policies

Fears that NZ Superannuation will diminish or disappear for future generations should be laid to rest, says Interim Retirement Commissioner Peter Cordtz in the three-yearly Review of Retirement Income Policies. 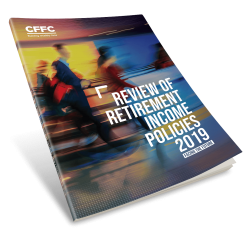 The two previous reviews called for a rise in the age of eligibility for NZ Super as it was deemed unaffordable, but Cordtz says latest Treasury projections show that the cost of Super is sustainable for at least the next 30 years, and raising the age would do more harm than good.

“Our research found that there will be more people in need of state support as they enter retirement in coming years, not fewer, due to declining home ownership, rising levels of debt and the changing nature of work inhibiting people’s ability to save,” says Cordtz.

This requires more work to be done across government to help people prepare for retirement, in areas of housing, work, KiwiSaver and enhancing New Zealanders’ financial capability. Cordtz’s 108-page report contains 19 recommendations that traverse these areas, and a call for the Retirement Commissioner’s office to be given more power to lead development and co-ordination of policies that will ensure New Zealanders can prepare for a good standard of living in retirement.

“NZ Super and KiwiSaver are the two core planks of the public retirement income system, but they are supported by a wide range of government policies that help New Zealanders learn, earn and house themselves as they move through their lives,” says Cordtz. “Under the legislation it is the role of the Retirement Commissioner to lead and monitor this policy work, but this office requires more resource and authority to do so effectively.”

While a number of recommendations made in his report would further refine KiwiSaver for the benefit of members, the key recommendation regarding NZ Super is to retain it at its current settings for future generations, and reassure younger New Zealanders that it will be there as a backstop for them when they retire.

“It was apparent from submissions and focus groups that younger New Zealanders, as well as their parents and grandparents, are concerned that NZ Super will not be available to future retirees, or at adequate levels. We received a lot of comments to the effect that ‘Super won’t be there for us’,” says Cordtz. “This uncertainty is causing unnecessary stress, and we think should be put to bed so New Zealanders can have certainty that NZ Super will provide a stable level of state support for them to plan around.

“It is enough for younger New Zealanders to have to worry about where they will live and how they will earn enough to support their and their families’ current and future wellbeing, without having to face additional uncertainty as to whether they will lose an effective government backstop. NZ Super is good value for money and its economic context has changed over time – it now looks affordable for the medium term, even though it did not necessarily look so in earlier years.”

The 2019 Review’s recommendations are:

1. Governance for the Retirement Commissioner and their office should be provided jointly by the Ministries of Social Development and Business, Innovation and Employment.
2. The regular review cycle should be amended to fall in the year after an election, rather than prior.
3. Value and ensure the ongoing provision of NZ Superannuation at its current settings.
4. Establish a new government ‘employment connection’ service.
5. Introduce a ‘Small Steps’ employee contribution programme to KiwiSaver as the default for new members, and as an option for current members.
6. Target the government contribution to KiwiSaver members to incentivise voluntary contributions by non-employees.
7. Phase in employer contributions for KiwiSaver members aged over 65, and consider implications of doing so for those aged under 18.
8. Phase out the inclusion of KiwiSaver in total remuneration packages.
9. Model the potential range of impacts if the owner-occupied requirement for first-home withdrawals from KiwiSaver was to be withdrawn.
10. Establish a centralised financial capability hub for KiwiSaver hardship applications.
11. Add a sidecar savings facility to KiwiSaver for short-term emergencies.
12. Auto-enrol beneficiaries in KiwiSaver through a government contribution.
13. Consider the introduction of care credits to KiwiSaver accounts to reduce the risk of being penalised for time out of employment caring.
14. A purpose statement for New Zealand’s retirement income system to be advanced by the Retirement Commissioner.
15. Exclude fixed fees from low-balance KiwiSaver accounts. For all balances under $5000, require providers to remove fixed fees.
16. Display fee projections on KiwiSaver members’ annual statements, and include a comparison to the average fee projection for that type of fund.
17. Mandate improved disclosure around share investing in KiwiSaver, further distinguishing between emerging vs established markets, as well as New Zealand vs Australian shares.
18. Make Prescribed Investor Rates (PIR) tax refundable. This would change PIR status to ‘not a final tax’, and accommodate people who use incorrect tax rates.
19. Introduce taxpayer funding of Mindful Money to guarantee the charity continues to publish unbiased, responsible investment information, and erase any potential conflict of interest.

Background and explanations regarding why these recommendations have been made can be found in the Report and Recommendation Summary below.

Cordtz’s report has been tabled in Parliament by the Minister of Commerce and Consumer Affairs, Hon. Kris Faafoi.

Cordtz’s interim term comes to an end on February 10, when Jane Wrightson takes over the role of Retirement Commissioner for a three year term. Cordtz will speak to his report until then.