Worker with Down Syndrome battles to release KiwiSaver savings 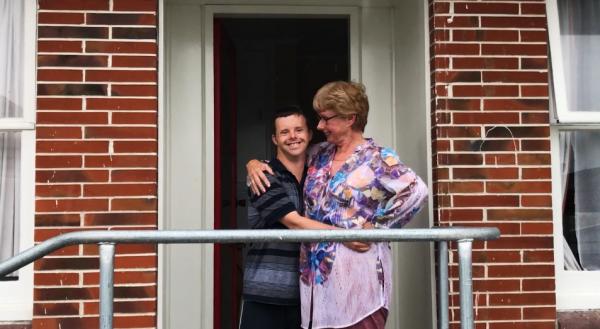 Action by mother Joan Fairhall on behalf of her 39-year-old son, Tim, to have his KiwiSaver funds released early is being supported by the Commission for Financial Capability (CFFC), and its head, Retirement Commissioner Diane Maxwell.

Tim has Down Syndrome, with an average life expectancy of 57. KiwiSaver funds are locked in until members reach 65, the age of eligibility for New Zealand Superannuation. Tim has saved $8000 in his KiwiSaver account through his job at Countdown supermarket in Te Atatu. He desperately wants to draw down on his savings so he can retire and travel overseas to visit his brother and niece before his premature ageing, which is part of Down syndrome, renders him unable to do so.

His mother Joan has tried every avenue to try to have Tim’s funds released, but has discovered it is impossible under the current legislation. Tim’s condition, and those of other New Zealanders with congenital life-shortening conditions, do not come under any of the justifications for opting out of the scheme, or having funds released under hardship applications.

“We believe that KiwiSaver is an excellent retirement scheme for most New Zealanders, but it discriminates against people like Tim with a congenital condition that causes premature ageing,” says Ms Fairhall.

As Tim’s KiwiSaver agent, Ms Fairhall has made a submission on his behalf to the Select Committee considering theTaxation (Annual Rates for 2018-19, Modernising Tax Administration, and Remedial Matters) Bill. The Bill contains a number of improvements to KiwiSaver rules and provisions, but not one that would help in cases like Tim’s. The Fairhalls recommend that the either the age for funds withdrawal be made younger for those with conditions like Down syndrome, or a principles-based element be added to the legislation allowing KiwiSaver providers greater discretion in withdrawal requests.

The head of the CFFC, Retirement Commissioner Diane Maxwell, says the Fairhalls came to her for help in late 2016 and the CFFC had supported them in their efforts to have Tim’s funds released.

“Tim should be able to access his savings. He has worked hard, saved his money and wants some active years after he stops working, which is a pretty reasonable expectation.,” says Ms Maxwell. “This issue cannot end up in the ‘too hard basket’. It may not be easy but it just requires a commitment to work until we get the settings right for more and more New Zealanders. And when we look back in years to come I would like to think we had the courage and the ambition to do that.”

Ms Fairhall says she and Tim simply want what is available to all other New Zealanders – access to a retirement savings fund that grows through their own and their employer’s contributions and the government’s annual Member Tax Credit, which Tim can withdraw when it’s time for him to retire.

“I congratulate the team the drafted the original leglislation on getting it almost right,” says Ms Fairhall. “They just overlooked the needs of one group of members.”

Submissions on the Bill close on Monday, August 13. The Fairhalls are looking forward to speaking to their submission before the Select Committee on or around September 5.

Posted in KiwiSaver; Posted 4 years ago